A few years back I found a “new to me” mushroom, but all the references say inedible, which does not mean toxic, but as per Wikipedia: “Inedible mushroom species may be those of very poor quality, or poor taste or likely to cause gastric upset or closely resemble poisonous mushrooms and cannot be recommended.” But then I also read in Wikipedia that this particular mushroom is commonly eaten in Borneo, with the little caveat: [citation needed] I spent quite some time searching for a recipe or frankly just any edibility reference. Trying the Latin name “Galiella rufa” (named after Mme Marcelle Le Gal, one of the few genera named after a female mycologist,) the two common names out there “Hairy Rubber Cup” or “Peanut Butter Cup Fungus” without success.

I went down the mycelium (a mycologists’ rabbit hole) and after a long while found a youtube video of a lady stir-frying said mushroom with a few other ingredients. I am not sure which Austronesian she speaks but I get the idea. But frankly, almost anything tastes good stir-fried with vegetables and plenty of seasonings. Anyway, I got brave and tried the mushrooms, I am intrigued. It is not about the flavor, barely any, but the texture is something crazy and it doesn’t change when cooked. The outside is rubbery, the inside gelatinous.

There are some aspects of Asian cuisine that are particularly distinctive which are texture and mouthfeel (kou gan in Chinese).  Most Westerners find slippery or rubbery textures fairly unappetizing unless the food is sweet, which is kind of strange, right?

Since I still can’t find anything but stir-fries I try to come up with something of my own. The mushrooms somewhat remind me of the Japanese Konnyaku which has little to no taste but is prized for its texture. Konnyaku is produced from the flour of a starchy corm mixed with limestone water to generate its rubbery viscosity. So I decided to cook the mushroom in a Dashi stock and serve it like a Konnyaku dish. I made a sauce of Miso, Sugar, Mirin, and Sake. Poured it over the mushrooms and topped the dish with sesame seeds and chopped Shiso.

The stock was slightly bitter after cooking the mushrooms in it, you could certainly just boil them in water or fry them in a pan. If you don’t have Shiso, you could use Cilantro, Basil, or green onions. I was quite pleased with the results and I am ready to do some more experiments with this mushroom.

I finally found what this mushroom is called in Borneo: Kulat mata kerbau (Buffalo Eye Fungus) which opened another possibility for online searches, like a research paper from the University of  Malaysia Sabah on the nutritional qualities of native mushrooms. And I learned that this mushroom is nutritionally valuable for its high iron content: 218 mg/kg, the FDA recommends 18mg for adults daily. 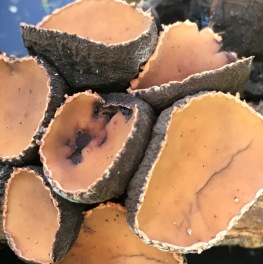 You might be asking why am I writing all this?

I want to change the status of this mushroom from inedible to edible if you are not a texture phobe. If you have any experience cooking it let me know.  If you cooked it like Konnyaku let me know how you liked it.

The Hairy Rubber Cup is, as the name says, a cup fungus that is quite gelatinous on the inside. It does not have a stem. The bottom of the cup attaches to a wooden branch. The outside is dark brown to black and fuzzy. The top is the color of peanut butter. It fruits in Spring to early Summer, along fallen branches from previous years, covered in leaf litter (the branches not the fungus). It is best to look under large deciduous trees. You want to train your eyes on shapes of empty acorn cups and the color of peanut butter. Here in the South, this fungus is quite plentiful and easy to find. 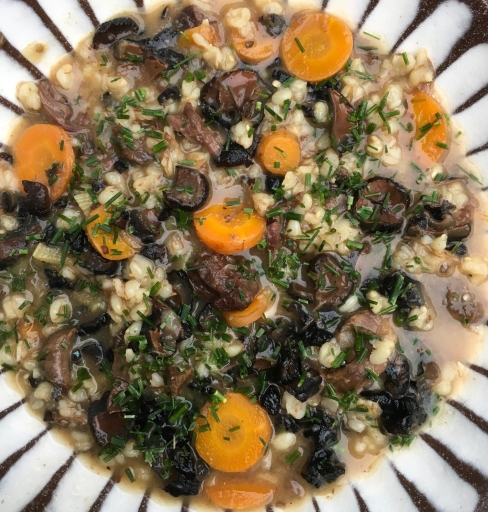 I made another recipe that was quite tasty, I added it to Beef and Barley Soup. Barley is kind of squeaky chewy in soup anyway, I thought it was a good match. I boiled it in water before adding it to the soup. It was good and I will make it again.

These little gummy cups are not my new favorite, but they are in season when not much else is. They are nutritious and as any mushroom, a low-calorie food packed with nutrients.

2 thoughts on “The Not So Inedible Galiella Rufa”